In debates on EU foreign policy, key concepts that people often refer to are multilateralism and multipolarity. When I met recently with the Inter-Parliamentary Conference this was again the case. It struck me that it might be good to specify how I see these concepts and how they relate to each other. 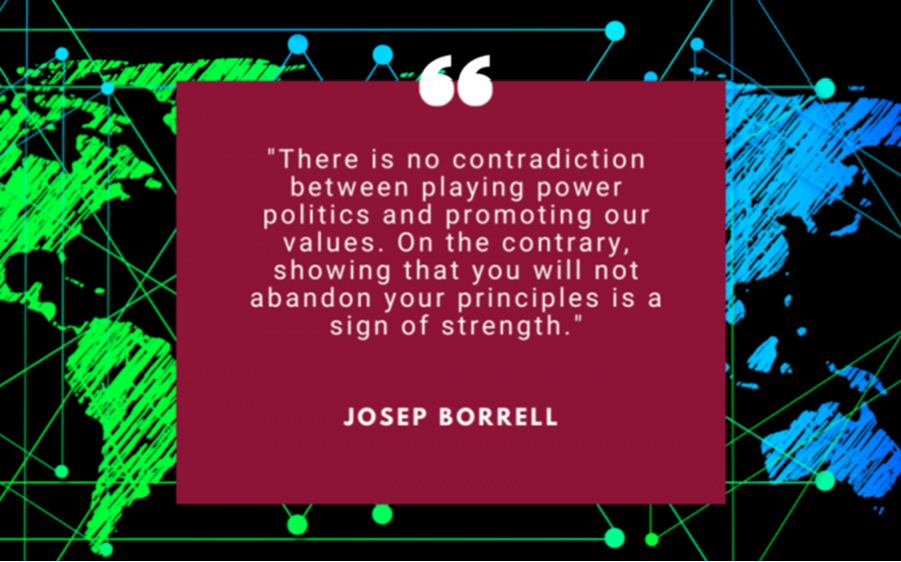 We all know that multilateralism is essential to our world vision but also facing strong headwinds. However, with the new US administration in office there is a real opportunity to work for its revival even if this is not going to be an easy task.  First because there are differences all over the world about how to rebuild it. Second because in a multipolar and fractured world, the geopolitical basis for multilateralism is changing. Third because Europe, like other global players in the world, will have to work in a more assertive way to advance its interests in a more transactional world.

I mean that if you want to advance some key principles on the world stage you need to throw your political weight behind them and not simply rely on their moral value. For example, since Europeans want to defend the principle that borders cannot be changed by the use of force, they adopted sanctions against Russia over its attempt to do just that in Ukraine. Those violating key principles must pay a price for their behaviour. That is why following my last visit to Moscow  I proposed to approach EU-Russian relations based on three elements: push back when Russia infringes international law, contain when Russia wants to weaken our democratic system and engage when we have an interest to work  with the Russian regime.

"The world today is becoming more multipolar and less multilateral."

The world today is becoming more multipolar and less multilateral. The challenge for Europe is to reconcile both dimensions, adapting to the new distribution of power, while working to mitigate the political fracturing of the world into competing poles.

Over the last three decades, we have seen a rapid transformation in the distribution of power around the world. We went from a bipolar configuration between 1945 and 1989 to a unipolar configuration between 1989 and 2008, before entering in what we today could call “complex multipolarity”.   Economically, for example, we have three dominant poles: the United States, China and the European Union. However, politically, the structuring is more complex. First, because an emerging Sino-American bipolarity is increasingly structuring the world system. Second, because there are important political and military powers without necessarily being strong economic powers (like Russia, or Turkey at regional level). Third, because there are actors in the middle of the fork, such as the EU, who carry a strong economic weight but who are political poles in the making. The ambition of what we call geopolitical Europe is precisely to close the gap between economic power and geopolitical influence.

"The development of Europe as a political pole is not contrary to the defence of multilateralism, but a basic condition for its effective defence."

Let us be clear here. The development of Europe as a political pole is not contrary to the defence of multilateralism, but a basic condition for its effective defence. In the first place, multilateralism is above all a methodology designed to regulate world relations on stable, transparent principles that apply equally to all, regardless of their size. This means that regardless of whether you are a smaller country or a great power, the rules are the same. However, as George Orwell imagined in “Animal Farm”, we know that even if states are formally equal, some are more equal than others.

Multilateralism is not a magic wand. However, it can mitigate the power differences that exists between states by binding them by common rules. That is why Europe and the vast majority of states worldwide endorse it.

Now, multilateral rules do not fall from the sky. They reflect a state of play  and very often the preferences of the most powerful. If, for example, we want to win the battle of the European Green Deal we will have to put in place a Carbon Border Adjustment Mechanism (CBAM), which is indispensable but also controversial. Indispensable because without CBAM we will face carbon leakage and comparative disadvantage for our industries. Controversial because many countries see it as a protectionist mechanism, which it is not. Therefore, it must be WTO compliant. We must build strong alliances with like-minded states and convince the most reluctant of them to join us in this endeavour.

We need to think in terms of balance of power while advancing our interests. We are a principled Union, but principles alone are not enough to make a policy and even less a successful policy. This is the main lesson we need to draw from the current global scene where power politics is on the rise.

"There is no contradiction between playing power politics and promoting values. On the contrary. Showing that you will not abandon your principles is a sign of strength."

The second reason for the crisis of multilateralism is that the liberal values of 1945 are on the defensive in our changing world. Alternative narratives challenge “the West” in every field, whether it be the economy, health, history, individual liberties or human rights. Russia, China and others see any discussion on human rights in their spheres of influence as an infringement on their sovereignty. While for the EU, human rights are universal values and a corner stone of our foreign policy. If Russia now tries to bypass the Union and deal directly with member states, it is also because the EU matters and hinders Russian goals. In fact, and contrary to what is generally believed, there is no contradiction between playing power politics and promoting values. On the contrary. Showing that you will not abandon your principles is a sign of strength.

The foundation of multilateralism in 1945 and its resurgence after 1989 were not exclusively Western, but resolutely liberal. In this multilateral and rules-based order, we Europeans were comfortable because it essentially reflected our preferences and interests. In tomorrow's world, the situation will be more difficult because there are competing claims and visions for how the international system should look like. The liberal voice is simply one voice among others. The states that challenge this view want to transform multilateralism from within and redefine it. They are investing in multilateral institutions to roll back this liberal vision.

In the face of this, Europe urgently needs to demonstrate the existence of a European point of view and forge alliances with like-minded states. In its conduct, it must be capable of forging issue-based coalitions, and being more assertive, more reactive and agile. For, once again, the balance of power does not always work in our favour. Europe defends a diversity of points of view and has no hegemonic ambitions. At the same time, it must ensure that this does not lead to a generalized relativism in which everyone does what they want within their own borders. That is why our commitment in international organisations such as the Human Rights Council is very important.

"We have three objectives when it comes to shaping multilateralism: to consolidate what works, to reform what no longer works well and to extend the scope of multilateralism to new areas."

There is a third reason for our work on becoming a political pole in a multipolar world. It is the need for us to defend our priorities on how to shape the multilateral system. On this we have three objectives: to consolidate what works, to reform what no longer works well and to extend the scope of multilateralism to new areas. That is the main message of the new strategy on multilateralism recently endorsed by the Commission and by me as High Representative. It offers concrete ideas on how the EU intends to revitalise and modernise the rules-based international system, in key priority areas from trade and investment, to health, climate change or rules on emerging new technologies. The strategy highlights the commitment to invest in creative partnerships, not least with regional organisations like the African Union, ASEAN and others, to strengthen collectively the UN and other multilateral fora.

Indeed, the challenge is not so much to change international rules, but to ensure their implementation. We can no longer be content, for example, to defend the WTO without modernising its procedures, particularly with regard to state subsidies. Finally, there are new subjects such as digitalisation or artificial intelligence where we urgently need to define new global standards. We need to be in a position of strength to do this. In addition, to achieve this we need to define a common position, develop arguments and build alliances.

"We are not obliged to choose between multipolarity which is a given and multilateralism which is an ambition."

All this to say that we are not obliged to choose between multipolarity, which is a given, and multilateralism, which is an ambition. Accepting multipolarity means facing the reality of a world that is diverse, and also fractured and conflictual. To defend multilateralism is to reject fatalistic viewpoints and rally around our strengths and our partners to make the global game more fluid, while always bearing in mind the interests of Europe and the values that underpin them.