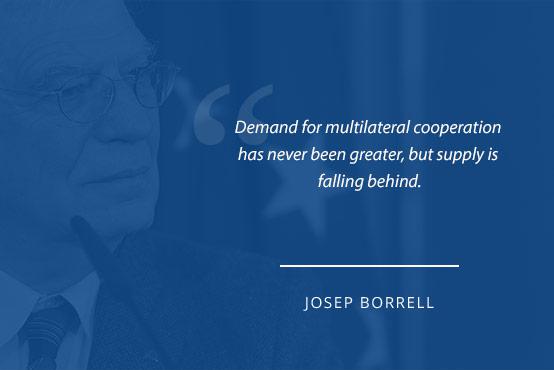 I was glad that my friend Heiko Maas asked me to speak at the opening of the annual German Ambassadors’ conference, together with Chancellor Merkel. It was an opportunity to stress how high expectations are for the upcoming German EU Presidency, to guide Europe through the crisis and make sure we come out of it stronger.

At various times in Europe’s history, Germany has played a crucial role in helping us to overcome various crises. For instance, I remember vividly how a previous German EU Presidency, back in 2007 – I was then President of the European Parliament – helped Europe to find a political agreement on how to move forward, after the rejection of the Constitution in the French and Dutch referendums. The result is called the Lisbon treaty, but Germany played a big role in it.

Since then, we had the financial crisis, the euro crisis and then the migration crisis. Three crises in twelve years is too much for a fragile Union. And now Europe faces another crisis, a much bigger one, an existential one.

We need to address the crisis in all its aspects, at home and abroad. I stressed to the ambassadors that the proposals by Chancellor Merkel and President Macron for the recovery are bold and this is what Europe needs. The pandemic is a symmetric crisis in its origin, but asymmetric in its consequences, as the fiscal capacity of states varies enormously. So we need to invest in common solutions and practice real solidarity. Based on grants and to invest in the economy of the future, on the green revolution and digitalisation.

This type of Franco-German initiative is more necessary than ever. But at the same time, it is not sufficient. We need to bring the whole of Europe together.

Demand for multilateral cooperation has never been greater

In both my speech and that of German Foreign Minister Heiko Maas (link is external) we discussed how COVID-19 is changing our world, essentially acting as a great accelerator of history, by strengthening trends that were already present before. Analysts have long talked about the end of an American-led system and the arrival of an Asian century. This is now happening in front of our eyes.

We both stressed that demand for multilateral cooperation has never been greater but that supply is falling behind. In fact, this is the first major crisis in decades where the US is not leading the international response. Everywhere, we see increasing rivalries, especially between the US and China.

As Europe, we have to take our responsibilities, in the multilateral area (later this week I will brief the UN Security Council on what the EU is doing) and in our neighbourhood.

During the German Presidency we will have set-piece occasions, such as the EU-Africa Summit or the EU27-China Leaders’ meeting, where we have to work together to give substance to our aim of building a geo-political approach.

For all this, we need to act as a Team Europe, or as ‘Europe United’, as my friend Heiko has called it. This in turn requires trust and common ground among us.

But too often, we are unable to reach a consensus because Member States cling to their national viewpoints instead of understanding that there is a broader common interest. An EU response – even if it is imperfect in the eyes of some Member States – is often better than a deafening silence.

Plus we need the resources to be effective. If you want an EU foreign policy that gets results, everyone needs to invest in it. Politically, but also financially. It will fall to the German Presidency to arrange for an agreement on the next EU budget.

At a crucial moment in Europe’s history, we will need to invest in an ambitious Europe. One that protects its people and its model: the best combination of political freedom, economic prosperity and social cohesion anywhere on earth.

Europe
Previous：In rougher seas, the EU’s own interests and values should be our compass Next：The post-Coronavirus world is here already
Return
关于我们 ABOUT US
关于我们 本站声明 顾问团队 寄语本站 联系我们
合作伙伴 OUR PARTNERS